Discover > Immersive Games Collection > Back to the Future 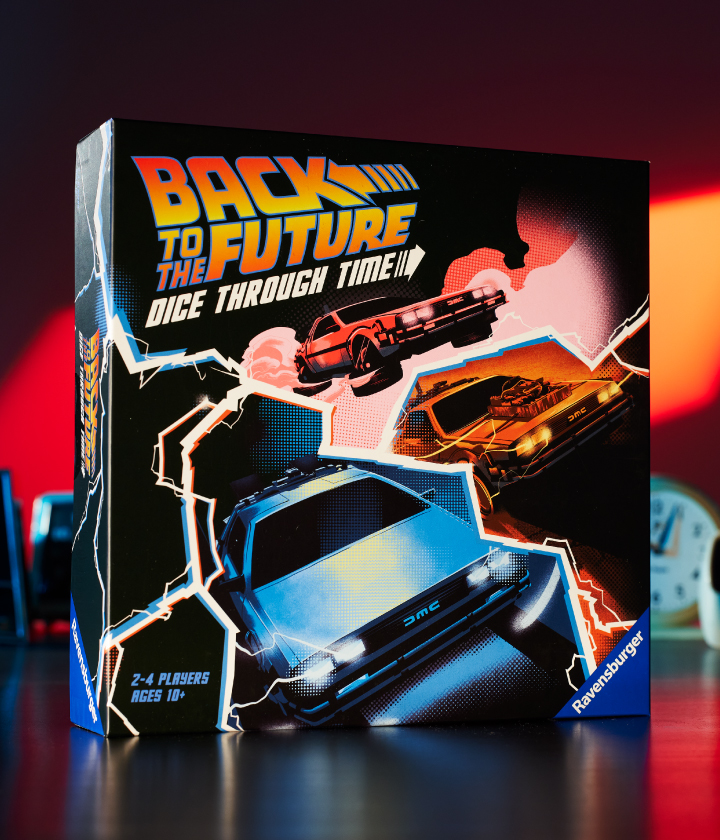 Biff stole the DeLorean and went on a joyride through time, disrupting events and scattering items through space and time!

Now it’s up to you to help Doc and Marty repair the space-time continuum before time paradoxes unravel the very fabric of the universe. Jump in your time machine, complete events, return items, and help restore temporal order! The future is in your hands!

Playing Back to the Future: Dice Through Time

In this cooperative dice game, you’ll take control of a DeLorean and travel through the Back to the Future film trilogy, solving events and returning items to their proper place and time before the OUTATIME tracker reaches “Game Over.” Each round, you and your fellow players will roll dice to determine your actions, which include time travel, moving meddling members of the Tannen family, and more.

You’ll use your dice to solve events as well. After solving an event, you’ll draw an item card, which you’ll need to return by traveling to the year and location listed on the card. Then, the OUTATIME tracker is reduced—buying you more time—and you earn an Einstein token. Einstein tokens provide one action anyone can use later.

Chris Leder is one of the designers behind Back to the Future:Dice Through Time.

Here Chris shares with us his passion for the Back to the Future movies and the thought that went into creating the game.

Could you tell us about your background? How did you come to be designing games?

I've enjoyed playing tabletop games all my life - especially dice games - and in the '90s I began tinkering with designing my own games.
As the tools to build and produce really professional-looking prototypes developed, so did my interest and passion for creating games.

Is this the first game you've designed?

I have designed around 35 games in the past 20-odd years, from deeply strategic games to light family games.
I look at game development as any other skill - the more you practice, the better you get! Granted, many of these designs never saw the light of day beyond playtesting, but I'm happy to say Back to the Future: Dice Through Time will be my fifth published game.

You worked with a team to bring Back to the Future: Dice Through Time together. How did that work?

I designed the game with Kevin Rodgers and Ken Franklin, and that collaboration was what made the design so fun.
I brought my love for the films to the design, and Kevin and Ken helped to reign in my more over-the-top ideas to ensure we made a game that was both authentic to the source material and as fun as possible for players of all experience levels.

Are you a fan of the Back to the Future movies?

The fact is, I am and have been obsessed with the Back to the Future films since I was 9 years old. Over the years, I have met the cast, collected memorabilia, watched the movies over and over, memorized the dialogue, and really built my identity with Back to the Future as a cornerstone. Anyone who knows me knows how passionate I am for Back to the Future.

Can you please give us an overview of the gameplay?

Back to the Future: Dice Through Time is a cooperative dice-driven adventure game that weaves a new story while taking place within the events of all three films.
Players each play as different versions of Doc and Marty from 1885, 1955, 1985, and 2015, working together to ensure that key events from the movies take place, while also locating misplaced items (like the hoverboard) and returning them to their proper places in space and time.
The dice in the game control your actions, as well as allow you to complete the events. All the while, you must contend with Biffs in all four years, repair paradoxes that arise, and avoid bumping your other selves on the board, which harms the space/time continuum!

Who do you think this game will appeal to/Who did you have in mind when designing it?

Many times, licensed games split the audience; perhaps they appeal only to serious gamers, or they are too watered down to appeal to fans of the source. With Back to the Future: Dice Through Time, we wanted to design a game that would appeal to everyone. Casual fans can enjoy the action of the game, and Back to the Future devotees like me will find many deeper references to appreciate. We set out to make the perfect Back to the Future game for everyone, and I think we succeeded!

Which features do you think really bring the spirit of the movies to life in the game?

We asked ourselves at the beginning of the design process what people remember and love best about the Back to the Future films. The very first things on our list were Doc, Marty, the DeLorean, and time travel. Other aspects were memorable - the Clock Tower, the hoverboard, etc - and we made sure to include those. The spirit of the films is in every aspect - time travel, for instance, shouldn't be a given, because look how often the DeLorean won't work in the films! And as for including time travel, we use a clever mechanism where you can "ripple" dice from the past to the future, just as in the films they buried the DeLorean in the Delgado Mine or write letters to themselves to gain knowledge later. These touches really feel authentic.

What do you think makes this game unique for fans of the Back to the Future franchise?

It all comes down to authenticity. We were careful to make sure that each decision stayed authentic to the original films - you won't find characters showing up in years where they don't belong, for instance - and as you play, you are consistently reminded of what you loved in the films. I truly poured every bit of my love for Back to the Future into this project, and I feel that it shows as you play.

How do you feel seeing the finished product ?

Words cannot describe the joy I felt when I first opened the box and saw the final production copy.
Even from the outstanding cover, you know that the game is going to be exciting. The DeLorean pawns are sensational, the art is evocative of scenes from the films, and the board itself looks like it's one of Doc's inventions, with wires, gauges, and metal pieces.

I love watching people set the game up and immediately begin pointing at locations and events they remember. It's a true joy to see the films come alive on the game table!

What was the first board game you owned?

One of the games I remember owning and loving as a child was Scotland Yard. The thrill of the chase and of rolling dice got me at an early age!.
Ravensburger Back to the Future Game - Dice Through Time Strategy Games
Expected to be available by
In stock
low stock
Currently out of stock.
Only available in stores.
More